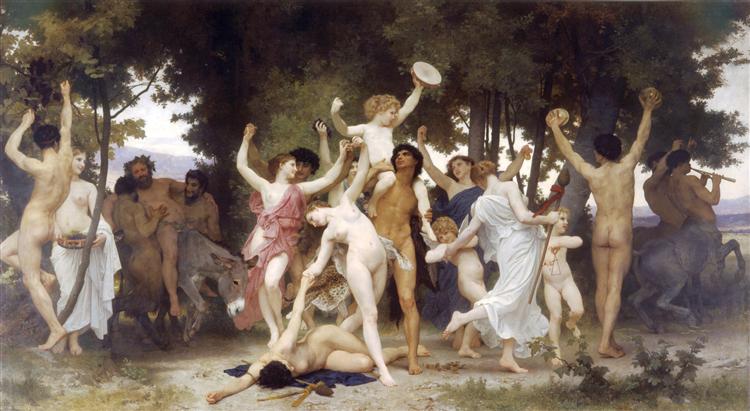 I recently attended a pagan gathering. It was held on private property, deep in farm country, in a secluded wood. During parts of the gathering, especially the rituals, many of those gathered, both male and female, were in various stages of undress, from wearing revealing clothing to being topless to being fully nude.

From the perspective of our Puritanical culture, this may be the most scandalous part of the gathering. My own experience with public nudity has been very limited. I’ve never been to a nude beach. And I’ve only been to a few Pagan festivals where there was nudity.

After the pagan gathering this year, I went back and read an article which I had written in 2011, after my first experience with public pagan nudity. I’m sharing it below, with only minor edits, in the hope that readers might offer criticism. It seems to me that the article still objectifies women’s bodies. There is a worrying lack of relationality in the article, I think.  The women have no histories, no personhood, beyond their function for the male viewer (me).  What do you think?

I was a virgin festival-goer at Pagan Spirit Gathering  (PSG) this year [2011]. And since I have never worked with a group that practices ritual nudity, this was my first experience with public nudity. At PSG, I encountered men and women in various stages of dress and undress, and I was surprised to discover that it was a healing experience for me.

I admit to a certain trepidation approaching this subject as a man, as I am acutely aware of how, in Western culture, the male is stereotyped as the seeing subject and the female as the seen object, and how this dynamic has contributed to the subjugation of women in myriad ways.

So I am aware that any account of a man’s visual experience of female nudity is treading dangerous ground in the (mostly) liberated culture that is Paganism.

By way of background, my own experience of female nudity over my lifetime has been ambivalent, to say the least, due largely to my Christian upbringing. I recall reading, years ago, a collection of essays entitled Men Confront Pornography, edited by Michael Kimmel. One of the contributors wrote about the centrality of men’s experience of looking, looking at women specifically, to the male psyche. He wrote about the (often unconscious) resentment that is fostered in men who are expected by our culture to look at women, are aroused by looking at women (sometimes involuntarily), but are also shamed for looking, and shamed for their arousal. I think this ambiguity in the male experience of looking at women is at the heart of misogyny.

Another step was learning a new way of looking. On this score, I was aided by a book written by tanrtic teacher, David Deida, called The Way of the Superior Man [a terrib;e title, it now seems to me] . In that book, Deida explains that physical arousal or attraction is not the result of choice, but the natural result of the flow of energy between masculine and feminine (wither hetero- or homo-sexual). Therefore, Deida writes, the desire that a woman arouses in a man (or vice versa) should be treated as a blessing, “one of nature’s gifts to you.” I was not a Pagan at the time I read this, but re-reading it now, it definitely resonates with my Pagan sensibilities.

Deida offers the following advice to men on how to develop a different visual experience of women:

Essentially, Deida applies the tantric practice of breathing to the experience of looking at women. Men have a tendency to hold their breath when they approach orgasm. By consciously maintaining a regular breathing pattern during intercourse, men can delay their orgasm and prolong the enjoyment of sex. Interestingly, we also unconsciously hold our breath or restrict our breathing when we look at women. I think in both instances the holding of the breath (usually accompanied by the constriction of various muscles) is a physical manifestation of an unconscious desire to control the experience. [Notice Adam’s clenched fists and rigid posture in the painting below.]

Breathing naturally when looking at an arousing woman (or man) is a way of letting go. When I breathe in, I receiving the blessing of the beauty of the woman I am looking at, but instead of holding on to it, I release it back into the world with my exhale. I compare a healthy experience of visual arousal to enjoying the beauty of a flower: seeing it, appreciating, but then leaving it, not picking the flower to take it home (thus killing it). The need to hold onto these moments of beauty and joy, to possess them, is what kills them, so to speak. In my opinion, it is what transforms [erotic] art into pornography. It is a manifestation of what Alan Watts calls “the possessive will”, the will to grasp and hold the mystery and beauty of life,

“to freeze the desired form of the living moment into an eternal and immobile possession. And so frozen, the thing is quite dead. The moment, the movement, the life has passed on and gone free.”

This simple exercise of breathing in and out transformed my visual experience of women. It transformed it from an experience dominated by an unconscious desire to possess, and is thus less likely to objectify the woman — since only objects can be possessed.

So back to my experience at PSG 2011. At the festival, I encountered three kinds of nudity. I am going to focus on the female nudity, since, as a heterosexual male, that is what has been problematic for me in my life. (I may write about male nudity in another post.) The first kind of female nudity I encountered was the completely un-self-conscious and non-erotic nudity of women at various workshops, performances, and other gatherings.

This was a healing experience for me. The women who were (partially) nude were so comfortable, and the people around them were so comfortable, that I couldn’t help be relax and be comfortable with them. It was healing because I was able to release, at least while I was there, the ironically Puritanical obsession with nude bodies that I had be taught by mainstream culture.

What was also interesting was that I began to appreciate the beauty of the nude bodies of women who, under different circumstances, I would not have found find attractive. But at the festival, everyone’s body seemed beautiful. It sounds trite, but I really experienced it that way. There was something beautiful, something divine, about sitting across from a woman in a workshop with her breasts bared, something that had nothing to do with whether she would be considered attractive in the mainstream world. She was far from the ideal female body type that mainstream culture endorses, but as I sat there, that woman “drew down” the Goddess for me; she incarnated the blessing of feminine physicality.

The experience called to mind a scene from the HBO series, Rome. In episode 6 of season 1, there is a brief scene with an obese woman, painted red, receiving donations in the street. She was a kind of living idol of the goddess Bona Dea. So I will call this “Bona Dea nudity”.

The second type of nudity I encountered was at Pan’s Ball. I have to say, I was disappointed with this event. What was supposed to be a true Bacchanalia, a sacred revel if you will, seemed like a frat party to me. There was no sacramental quality to the event a far as I could tell. And, just as at a frat party, the nudity (male and female) at the Ball seemed very self-conscious. Consequently, I felt very self-conscious.

It was like the difference between American and French films. The French films may actually show more skin, but the American films are so self-conscious about sex and nudity, you can almost hear the American film makers tittering over their own “naughtiness”. It is a product of the fact that we are attracted to and obsessed by that which we stigmatize. I was aroused by the nudity at Pan’s Ball, of course, but not comfortable. And I left early. I will call this “pseudo-bacchante nudity”.

This experience combined the un-self-consciousness of the first kind of nudity I described above (“Bona Dea nudity”), with the arousal of the second kind (“pseudo-bacchante nudity”). This was perhaps the most healing of the three experiences, because is sacramentalized not only the nude bodies of the women that I saw, but also my arousal. I will call this “true bacchante nudity”.

I wonder, is this experience what St. Ambrose tried ineffectually to express in the image of the “casta meretrix”, the “chaste prostitute”? Is the longing for this kind of sacred eroticism at the root of the Madonna-whore complex in our culture? Could this kind of experience help to heal men from the unhealthy ways we have learned to look at women?

Ok, so I think I was on to something here.  But, looking back on it after 7 years, the article bothers me.  I worry that it still objectifies women.  What do you think?  Leave your comments below.  Comments of female readers would be especially appreciated.

P.S. Tom Swiss has written a good article about his own experience of getting naked here: The Zen Pagan: Wild Naked Pagans.  I urge you to check it out too.

8 thoughts on “Dancing Naked in the Woods: Pagan Nudity and Christian Shame Culture”