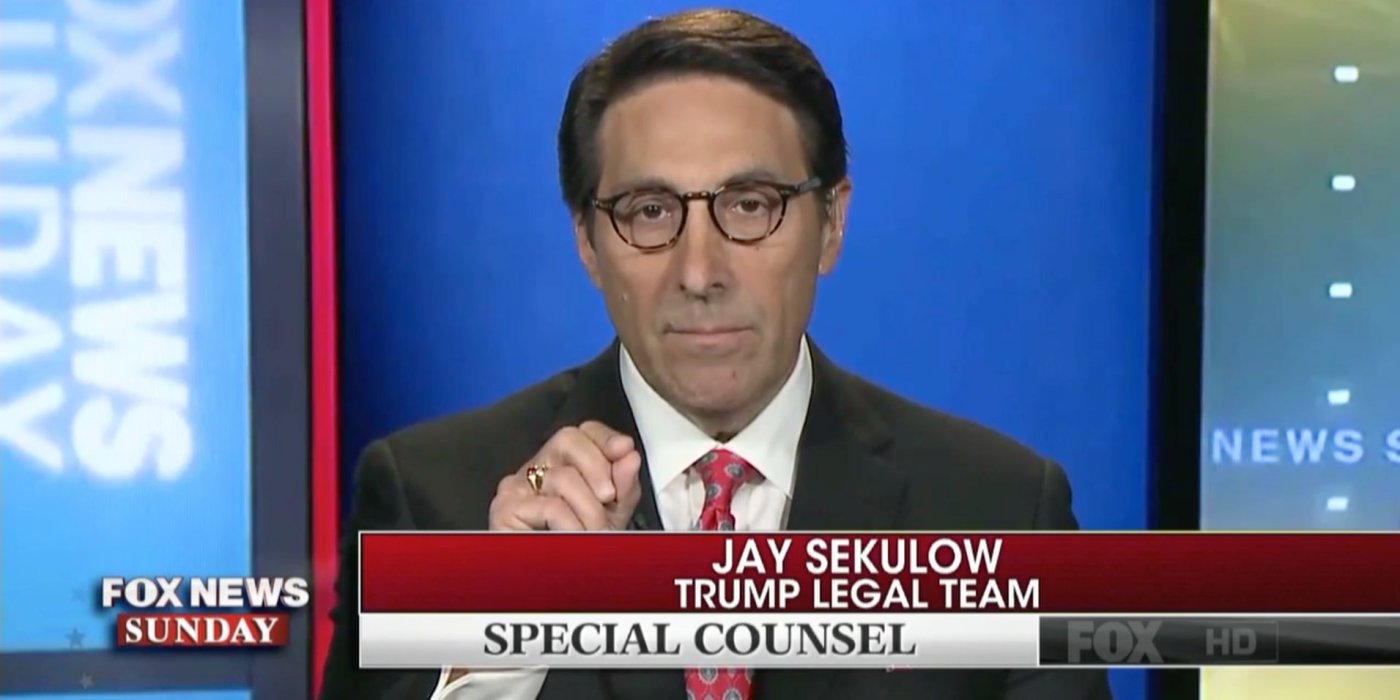 So I’m watching Rachel Maddow tonight–something about threats to fire special investigator Bob Mueller–and I hear a name: Jay Sekelow.  He’s Trump’s lawyer. Where have I heard that name before?

Oh, yeah. In connection with the Patheos Pagan controversy!

Ok, so remember when I drew an analogy between the increasing censorship at Patheos and the anti-free speech attitude of the Trump administration? Remember when people said that was a stretch? Well, you know, the funny thing is, it doesn’t seem like such a stretch anymore.

Why? Because of Jay Sekulow.

If you’ve been following the news about the Trump administration lately, you’ve probably heard the name Jay Sekulow.  Sekulow is one of Trump’s legal advisors and is frequently referred to in the media as “Trump’s lawyer.”  He makes frequent appearances on Fox News (or so I’ve been told).

In addition to advising Trump, Sekulow is also chief counsel for the the far-right Christian evangelical organization, the American Center for Law and Justice (ACLJ).  The ACLJ was founded by Pat Robertson to oppose the American Civil Liberties Union.  Since 1991, Sekulow has been working through the ACLJ hto defund Planned Parenthood, defend school prayer and government subsidization of religion (or rather, Christianity), oppose the Islamic community center at Ground Zero, oppose LGBT marriage equality in the US, and (last but not least) promote the criminalization of homosexuality in Africa (because I guess you can’t get away with that shit here anymore).

What has this got to do with Patheos?  Actually, more than you might think.

The connection between Patheos and the ACLJ is a matter of public record. Patheos and Affinity4 are BN Media brands, and Affinity4 funnels charitable contributions to the ACLJ, as well as several other right-wing groups like the National Rifle Association, the Billy Graham Evangelistic Association, Focus on the Family, Gun Owners of America, Promise Keepers, Concerned Women for America, and the American Family Association.

But that’s not all. Jeremy McGee, is President and COO of Patheos.  He’s the person that Gwion Raven and I talked to when we were trying to renegotiate the Patheos contract on behalf of the Pagan Patheos writers.  McGee was on the Board of Affinity4 together with Jay Sekulow!  Both are evangelical.  Both serve on the Board of Affinity 4.  Affinity 4 is the link between Beliefnet (which now owns Patheos) and the ACLJ.

You know, at the end of the post that got me kicked off of Patheos, I wrote:

“It’s difficult to avoid the observation that the situation at Patheos is a microcosm of some of what has been happening on the national stage recently, with the power of corporations expanding and those same corporations (through their political lapdogs) trying to put limits on our freedom of speech. It makes me wonder if the timing isn’t coincidental: An evangelical company acquires Patheos. Trump is elected and sworn in. A number of Patheos bloggers are critical of Trump. And now, the new owners of Patheos want to exercise more editorial control. Coincidence? Maybe.”

At the time, several people said I was reaching with this statement. Even though the connection I was drawing between Trump and Patheos above was analogical, rather than causal.  But now that Jay Sekulow is President Trump’s personal attorney, the connection seems much more tangible.  Since Patheos was bought out by BN Media and Jay Sekulow has become Trump’s legal advisor, Patheos is now just one step removed from the Trump administration.

What’s more, BN Media also seems to have taken a page from the Trump playbook for dealing with negative publicity.  Since the Patheos controversy broke out, BN Media has taken active steps to obscure the relationship between Patheos and the ACLJ and Sekulow.  First, the page which previously listed the right-wing organizations that Affinity4 funnels charitable contributions to has been removed.

This page above previously listed numerous right-wing organizations. Apparently, Affinity4 no longer wants this information to be publicly available.  Here’s a screenshot of what used to be displayed on the page:

Then, the Wikipedia page for Affinity4 was edited to remove Jeremy McGee from the Board of Directors of Affinity4. As you can see from the screenshot below, McGee’s name was added to the list of Affinity4 directors on November 11, 2016.

And then, on February 3, 2017, just days after the Patheos controversy broke out, McGee’s name was removed from the list of directors of Affinity4, as you can see below.  (Fortunately, Wikipedia keeps track of these edits.)

The changes appear to be deliberately designed to occlude the relationship between McGee and Sekulow and between Patheos and the ACLJ.  If the connection weren’t significant, why try to hide it?

If I’m starting to sound like a conspiracy theorist, it because we’re living in a time of conspiracies, when fact is stranger than fiction–as the evening news every night makes clear.

Over two dozen Pagan authors have since left Patheos, due in part to concern about the morally problematic connections between Patheos and far-right political groups like the ACLJ, which was of special concern in light of Patheos’ demand for increased editorial control over its authors.  Some people called that move precipitous at the time.  But now that Sekulow is serving as Trump’s legal counsel, I have to wonder just what it would take for those remaining to recognize the writing on the wall as Trump’s scrawl.

NOTE: After considering the comments on the initial Facebook post linking to this article, I decided to remove the references to editor of Patheos (either his name or position). There were three references to him in the article, all of which to me seemed innocuous to me, but were the focus of the criticism of the post. So I have removed them. The post was not intended as a personal attack on the Patheos Pagan editor, so it did not substantially change the meaning of the post. But it may have changed the tone for some of my readers. I’d be interested to know people’s thoughts on the post now.

3 thoughts on “What Does Trump’s Lawyer Have to Do With the Patheos Pagan Channel?”