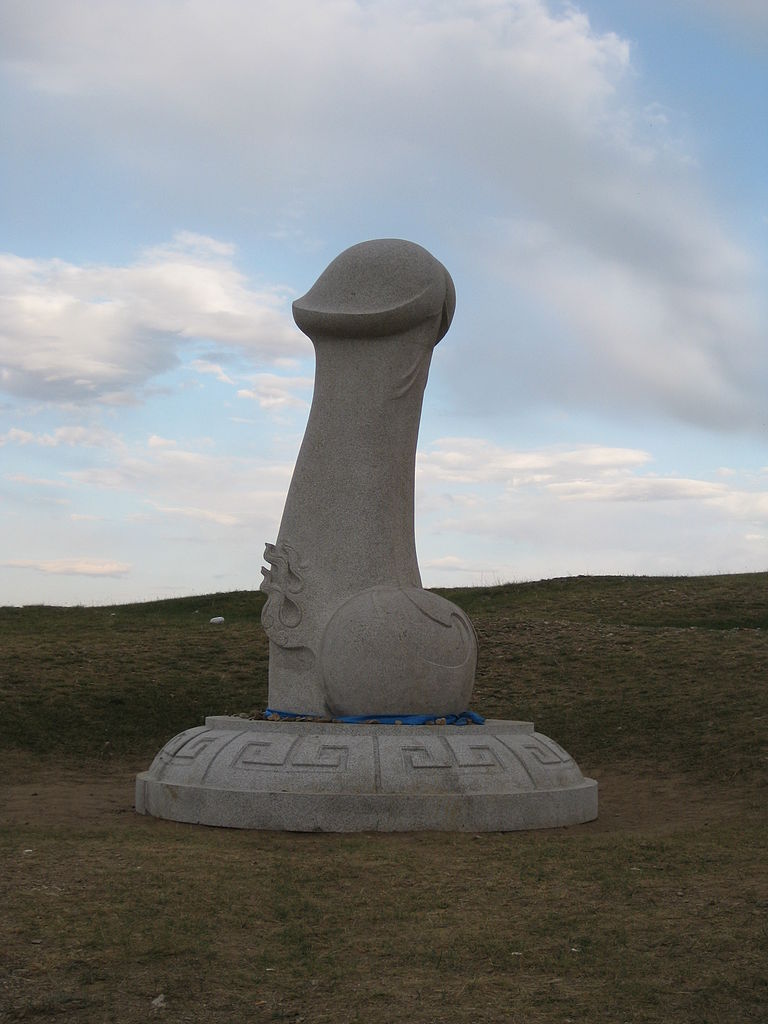 My recent post “’You’re Not Fucking Gandalf’: 12 Movies to Remind You That Pagans Need to Grow Up” just hit the high mark of the most read post ever here on AllergicPagan.com.  This prompted me to go back and pull out an old post about the fraught relationship between blogging and sensationalism which I wrote last year.

Bloggers tend to be pretty secretive about their internet traffic stats.  Kind of penis size (for you guys).   I know novice bloggers (as well as many experienced ones) tend to obsess about site traffic — after all, you want to know that someone is actually reading what you’re writing.

Last month, I had my second best month ever (in terms of internet traffic), with 37,000 page views.  It prompted me to go over to Google Analytics and try to figure out what is going on.  In this post, I’m going to bare all for you, in the hopes that some of what I found may be useful to other bloggers.

1. No Matter How Big You Are, There’s Always Someone Way Bigger.

I’ve been blogging for 5 years now and I joined the Patheos team 3 years ago.  Just before that, I celebrated my 250th post with a thank you to my readers.  At that time, I was excited to have 650 views in single day.  (That was in response to two polemical pieces about the Pop Culture Paganism debate.)  Now, with almost 600 posts in my pocket, 650 views a day is nothing remarkable.

For obvious reasons, Pagan bloggers do not draw a lot of traffic.  If you put all the Pagan blogs at Patheos together, they would not add up to the traffic of some of the blogs on other channels at Patheos, like The Friendly Atheist.  Some of Hemant Mehta‘s posts may draw more traffic in a day than I do in a year.  And my blog probably doesn’t come close to Jason Mankey’s — who is a master at directing internet traffic his way.

An article I wrote at Huffington Post on “The Real Reason White People Say ‘All Lives Matter’” in July really put things in perspective for me.  I was amazed when it got 450,000 likes in just a couple of weeks.  That was largely because the editor decided to put it at the top of the daily email blast.  In the 5 years I’ve been blogging at The Allergic Pagan, I’ve only gotten three quarters of a million views — that’s all 5 years combined!

Here’s the takeaway: No matter how big of a Pagan blogger you are, you’re still relatively small — so don’t worry about it.

2. You Can Measure Success in Many Different Ways.

There’s different ways to analyze what posts are the most popular.  For example, you can look the views on the day the post is published or a few days after.  Or you can look at the traffic over time.  Some posts are “showers”: they get a lot of views right away and then fizzle out.  Others are “growers”: they may not get many hits in a single day or week, but slowly gather views over years.  Some posts may peak multiple times.  Posts about the Wheel of the Year, for example, may peak perennially (especially if they get shared again).

You could also look at shares (Facebook, Google, etc.) or likes as measures of success — but I see shares as just a means to an end (pageviews) and likes as indicative of absolutely nothing at all.

Or you could look at the number of comments — I like posts that generate a lot of discussion, pro and con, even if they don’t draw much traffic.

3. You’ll Probably Be Surprised By What Becomes Popular.

So what did the analysis of my blog reveal?  Let’s start with the “growers”.  Depending on how you crunch the numbers, my most popular post to date was a satirical piece where I announced that I’m a spy for the Mormon Church.  That post drew over 12,000 view over 5 days.  The “clickbait” title and the tabloid nature of the post were probably responsible for the attention it got.

The second most popular post was about How Vampires Led Me to Paganism, which drew over 7,000 views over two days — largely because Anne Rice (author of Interview with a Vampire) shared it on Facebook.

A Pagan Lawyer’s Take on Indiana’s “Religious Right to Discriminate Law” drew 7,500 views over 5 days, likely due to the timing of the post in relation to the heated Indiana RFRA debate.

Somewhat surprisingly, my Triple Goddess series in November 2014 did very well too.  13 Things You Don’t Need to Know About the Triple Goddess (but are kind of interesting) spiked about a week after publication, with 7,000 views over 2 days, and then again with over 5,000 views almost a year later, when I had my most successful month ever.  (I’ve noticed that listicles — like this one — tend to draw more traffic.)  The timing of the spikes suggests that they were due to someone else sharing the post.

Preceding the 13 Things post, I did a 3-part series which was more scholarly, but also drew a fair amount of attention: The Secret History of the Triple Goddess.  Part 1: Triads, Triplicities, and Trinities got 3,500 views when published and another 1,400 a year later.  Parts 2 and 3 were more “growers” than “showers”.  Part 2: The Search for the Triple Goddess of Antiquity never got even 1,000 views in a day, but did draw 4,500 over a year and a half. Part 3: Will the real Triple Goddess please stand up? also never got over 1,000 views in a day, but did accumulate 7,500 views in the year and a half since it was published.  Altogether these added up to my first and third best months ever, with over 43,000 and 32,000 views.  Given their academic nature, these post really shouldn’t have gotten that much attention.  I suspect that the same person(s) that promoted the 13 Things post also shared Secret History posts.

Other posts that got over 3,000 views (in a day or two) included two posts about why I wasn’t and then (a  year later) why I was joining the Unitarian Universalist church.  These probably got traffic because they were shared by CUUPS on Facebook.  (The first article was actually mentioned in the UU magazine.)

The takeaway from this is that titles are key to catching people’s attention.  And even more important is getting someone with a large audience to share the post on social media.

Publishing super-popular posts is not the only way to create successful blog.  Another way is to write posts that create a smaller, but steady stream of traffic — or better yet, a combination of both.

I noticed that many of my Sabbat posts also did well, including last year’s Why I’m Boycotting Lughnasadh and this year’s Gods Save Us from Bad Pagan Rituals: 10 Signs You’re Half-Assing Your Mabon Ritual.   (Again, catchy titles are key.)  In contrast, some of my other sabbat posts have been “growers”, rather than showers.  My Family Winter Solstice Ritual never got even 300 hits in a day, but it peaked again every year, and got almost 5,000 views in 3 years.  Similarly, What in Sam Hain?, peaked at 1,300, but drew 4,500 views over 3 years.

Some of my other “growers” were Why I don’t trust the gods (at least not if I’m alone with one), The Power of Simple Gestures, and Why “Pagan”? – An Atheist Pagan’s Response to a Theist.  These were not popular posts when published, but continue to bring in a steady trickle — probably because they catch people’s eye during Google searches.

My most popular “growers” actually had nothing to do with Paganism directly.  “Once more into the fray …”, which is about the movie The Grey (little more than a movie review really), has ranged from almost 4,000 views in a month to about 500 views in a month, and has now collected 60,000 views over 4 years.  Similarly, The Complete Works of Carl Jung gets only about 30 views a day, but has drawn 30,000 views over 4 years.  But, while these posts bring a lot of traffic to my blog, I doubt the people who are interested in those posts are interested in much else on my site.

5.  None of This Really Matters.

If this was all I had to show for 5 years of writing, I would quit.

The truth is that most of the posts mentioned above are not among my best.  The posts that I am most proud of, the most real things I have written, barely get noticed.  Essays like “It’s 5 a.m. at Pantheacon“, “Someone said something stupid on the internet … so I went to my altar”, and “Why I am grateful for Paganism: The comfort and the affliction” are not going to get shared on Facebook or come up on Google searches, but they were among the most heartfelt things I have ever written.

I’m also proud that I was able to use this blog as a vehicle for promoting A Pagan Community Statement on the Environment and other writing about environmental activism and deep ecology, as well LGBT and racial justice.  I am also proud of much of my writing here advocating for a space for non-theists and atheists under the Big Tent of Paganism and critiquing Paganism from within.  And I am proud of the fledgling Earthseed tradition, which got its start here.

But none of this shows up in the Google Analytic statistics.

The moral is: The heart of a blog is not to be found in the number of pageviews (or likes or shares).  I think the heart of a blog is in those words that touch maybe just one or two people out there.  You may never even know.  If you’re lucky, one of them will comment and thank you.  And that makes it all worth it.