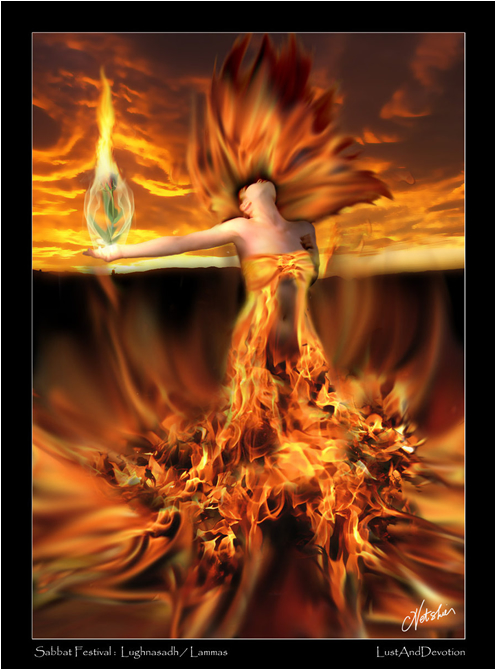 The Pagan Wheel of the Year bugs me.  The timing of the cross-quarters bugs me.  The meaning attached of several of the eight stations bugs me.  And the names of most of the days bugs me.  Right, now I’m just going to focus on Lughnasadh, though, since it’s right around the corner.

Why “Lughnasadh” Is a Terrible Name

To begin with, “Lughnasadh” is a terrible name for this holy day.

Why did we ever start using the name “Lughnasadh”?  For once, we can’t blame it on Gerald Gardner.  Gardner’s coven originally observed the cross-quarter days, but his Book of Shadows gives no name for this date other than “August Eve”.  Likewise, Gardner’s source, Margaret Murray’s The Witch-Cult in Western Europe, also did not give a name to the August 1st sabbat.  Robert Graves identified eight stations on his calendar in his The White Goddess, but he used the name “Lammas”, which was adopted by many Pagans and is still used.  “Lammas” is the name of an Anglo-Saxon harvest festival , but it is also the name of a Christian feast day (i.e., “Loafmas”). As far as I can tell, “Lammas” was name that was used by most early Wiccans and Pagans, and “Lughnasadh” was a relatively late addition.

Finding a Name That Makes Sense

But it’s not just the name that is the problem.  The real problem, I think, is that we are starting with a name, then working out what the day should mean from its etymology and history, and then trying to associate it with the season—which is completely backwards!  We need to look at the season, work out what the holy day should mean, and then come up with an appropriate name.  The year should turn the Wheel, not the other way around.

Now this will vary depending on where you live, of course.  Even within the U.S. there are different climatic zones.  So what follows is just what works for me, but it illustrates what I think should be the right process:

I live in the Midwest.  Due to the seasonal lag, we’re still in the middle of summer in late July/early August.  In fact, it’s the hottest time of the year on average.  That the mid-point between the summer solstice and fall equinox (August 7 this year) corresponds roughly to the average peak temperatures.  August, then, is literally “mid-summer”, as in the middle of summer.  Of course, this would not be true across the U.S.  (In San Francisco, where a lot of Neo-Paganism developed, the temperatures do not peak till mid-September due to the Bay waters.)  The heat is the salient fact of the season for me.  If we happen to be going through a cool spell or the weather is rainy, I will delay the celebration.  I think it’s important to celebrate the festival on a day that is hot and sunny.

2. Next, work out what the day means mythologically in relation to the season.

Interestingly, the closest Christian holiday is the Feast of the Transfiguration, on August 6.  The transfiguration of Jesus can also be seen as a kind of “consummation” by (divine) fire.  It occurred on top of a mountain, where Jesus was revealed in all his glory.  As such it was a kind of “climax”, which prefaced the “descent” of Jesus into his passion and sacrifice.  The climax and consummation of the Consort of the Goddess in the flames of his “passion” is, to my mind, its own kind of Pagan Transfiguration, if you will.

Since it is the middle of summer, it is also the beginning of the end of summer.  This is the moment when the flower of summer is blossoming at its fullest, and tomorrow it will begin to wilt.  This day is like fruit that has ripened to the point where it is its juiciest and tastiest, but on the next day it will begin to rot.

The meaning of this day, for me, is that pleasure is fleeting.  We must enjoy life while we can, knowing that it cannot last forever.  When we see the beautiful flower blossom, we must either leave it, knowing we may never see it again, or pick it, knowing that in doing so we also kill it.  In the past, on this day, my family has read a (toned-down) version of the hierosgamos or hierogamy from the Song of Songs.  Personally, I like to read the Sumerian text of Inanna and Dumuzi’s courtship and consummation, which is even more erotic than the Song of Songs.  As part of our ritual, we eat ripe juicy fruit and burn a bouquet of flowers.

3. Last, choose a name for the day that fits the season and the myth.

The season itself suggests that the name “Midsummer” would be appropriate for this date.  The only problem is that, across the world, “Midsummer” is associated with the summer solstice.  In our family, we never celebrated Midsummer before I was a Pagan, and so there’s no associations with the solstice, but it might be confusing for many Pagans.  “High Summer” conveys the same meaning and is less likely to be confused with the solstice.

The analogies I used above of ripening fruit suggests another name, “First Fruits”, which is a name commonly associated with the day by Pagans.  While technically we enjoy many fruits year-round due to modern agriculture, here in the Midwest, many fruits are only available or more available (and seem more flavorful) in the summer months.

Another name I came across in my research was “Gule”.  Lammas was called the “Gule of August” in medieval times.  No one knows for sure what”gule” means, but some people think it means “gullet” or “mouth”, as in the “mouth of August”.  Since this date marks the last high point before the slow slide down into autumn, “Gule” may be another appropriate, albeit somewhat archaic, name.  But since there could, theoretically, be a “Gule” for all the cross-quarter days, i.e., “Gule of November”, “Mouth of February” etc., I don’t really like the name.  Plus, it sounds too much like “Yule”.

For now, I’m sticking with “High Summer” and “First Fruits” until I come up with something better.  But I avoid calling it “Lughnasadh”.

2 thoughts on “Lughna-say-what? What to Call This Pagan Holiday”